Home » Closed venues » The Phoenix at The Central 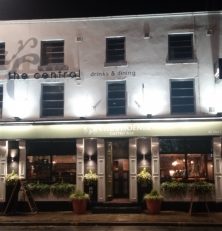 The Phoenix at The Central 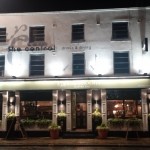 Looks much the same from the outside. A bit greener.

The Central has returned from the ashes (literally – its owners lost their previous venture to a fire) as The Phoenix. This part of Wellington Street is full of offices and almost devoid of pubs, so it was packed with the post-work crowd when we visited.

The new owners have taken care to only redecorate the bits that needed it, and we were pleased to see the huge map of Leeds is still a major feature. 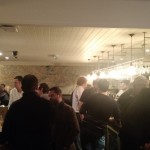 The posh décor and the big map are still here!

The main focus here is on food, and the menu is very extensive and reasonably priced. There’s a particular emphasis on lunches, with a separate coffee / sandwich / cake bar opposite the main bar. At the weekend there’s a “bottomless brunch” for £15 that we will have to try!

But of course we’re mostly interested in the beer. Sadly this was a bit of a letdown. 4 cask ales (Saltaire, Black Sheep, Tetley), Brooklyn in bottles and not much else to speak of. But if you’re coming here for the food then maybe the beer selection doesn’t matter to you as it does to us! 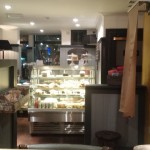 Now this is a great idea – a sandwich/cake station in a pub!

We also saw adverts for Jazz Sundays, which we assume are live music events although there were no details on the adverts.

It’s great to have this place back in action, especially with such a strong emphasis on food. The crowds and the poor range of beers means we won’t be back often but if we’re over this end of town we might well pop in.