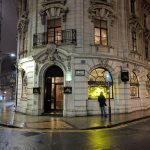 Atlas Brauhaus is a new direction for Atlas, eschewing London vibes for something more Bavarian.

While at first glance it looks very much the same inside, there’s obviously been a lot of work put in to subtle changes, not least the installation of a lot more taps. There are now 14 kegs alongside the 3 casks. In-keeping with the German theme, most of the kegs were German and there were a handful of Czech/Belgian/Leeds ones too. On the whole the beer choice is very Reinheitsgebot, which is great if you like that style of beer but it seems a bit bland and repetitive to your Questers. There are a few more daring beers available in bottles, including a couple each from Brooklyn and Anchor, Delirium Tremens and Chimay Bleu. Apparently there are also keg taps on some of the tables although we missed this when we visited. Pints are about £5 each. 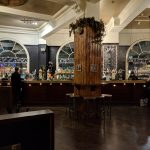 There’s a full food menu of Bavarian cuisine (or, at least, a British stereotype of Bavarian cuisine), so it’s probably one of the best places to go if you want a bratwurst or a Schweinshaxe and there’s a nice selection of sharing boards with sausages and sauerkraut. 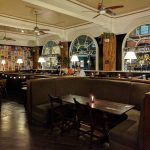 The décor has had a revamp, but it’s still the same old Atlas.

It’s definitely a more interesting direction for Atlas, and it’s good to see that the Bavarian cuisine market is not entirely catered for by awful stag-party oompah venues. But it’s not really the place to go if you want a really interesting night out with some quality drinks.