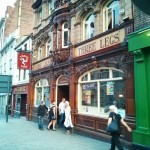 Three Legs, exterior. What delights await us inside?

A few times already on this quest, we’ve had low expectations of a place based on its reputation or outer appearance, and we walk out eating our words. The Three Legs does not represent one of those times.

The is the last pub standing out of an unholy trinity which used to include The Vine and Big Lil’s, and in this case resilience does not mean vibrance. Though its Victorian exterior is nice enough, once you step inside you’re hit with the sights, sounds, smells and — shall we say — tactile sensations of a poorly maintained dive bar with enough regulars that it doesn’t need to appeal to an outside crowd. This place is sticky. 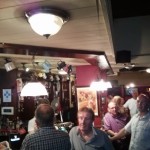 Two neglected cask taps sat on the bar but they didn’t seem like they ever got used. John Smith’s and Guinness were the keg offerings and Sol was the most decent bottle in sight. We ordered our beers and found a table in the corner where it wouldn’t seem too obvious we were taking notes or pictures. We felt conspicuous enough as it was. 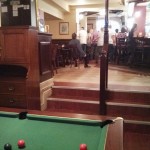 The crowd shifted toward the front of the pub as soon as the karaoke machine fired up.

Now don’t get me wrong — it’s not as if a hush drifted through the place when we walked in. The bar staff were nice and accommodating and the bacchanal clientele were definitely friendly. One patron in particular got stuck in a loop of talking to us and then apologizing for talking to us and then talking to us some more. Inebriation is certainly not discouraged here. And how lucky were we that they even had karaoke going on when we visited! 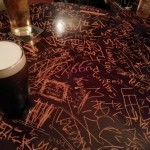 Be sure to bring your pen knife!

Positives about Three Legs? They don’t seem to mind people carving graffiti into the tables (if that’s your thing) and we smiled at the whimsy of having a dartboard on the ceiling. Other than that, the best thing it has going for it is it’s only a short walk to North Bar.