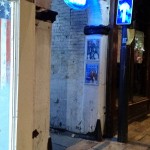 Hidden away in a back alley off Briggate, Blayds is one of the oldest LGBT bars in Leeds. Apparently it used to be a women-only venue but it’s been open to all for a few years now, and the crowd was mostly (but not exclusively) male when we visited on a Saturday night.

The space is really tiny: there’s a small triangular room with a DJ and dancefloor downstairs, and an events space upstairs that was closed when we visited. The crowd inevitably spills out onto the large square outside: signs saying “no alcohol outside” are confidently ignored. 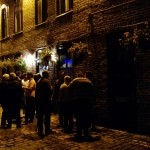 Lots of people in the courtyard: maybe because it’s tiny inside?

The bar has no interesting beers: Peroni & Sol in bottles, Fosters, John Smith’s and Kronenbourg on keg. Like all the other LGBT bars in Leeds, Blayds assume their audience just want to drink spirits and indeed this is the only place in the world I’ve ever seen vodka on tap. If you can cope with awful beer then you can get it very cheaply here — about £2 a bottle — if you come during happy hour (before 9pm). 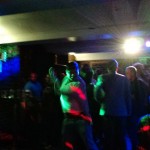 The dancefloor and bar. Our policy of trying to avoid taking photos of people was impossible to maintain.

It’s definitely a lot younger and cooler than The New Penny. The music was well mixed 2010s chart stuff, played very loud. They also have karaoke on Wednesdays and a quiz/bingo mashup on Thursdays.

The website says Blayds opens at 5pm every day but we’ve found this isn’t generally the case. I think 7 or 8pm is more normal, so turn up late to avoid disappointment! 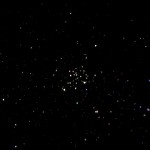 Not the view from the Starship Enterprise, but a closeup of the sparkly wall.

And the walls are sparkly. Every square inch of wall space is sparkly. I don’t really know how they do it.

Blayds has obviously reached out to its target market and found them: people who enjoy awful drink and loud chart music on a crowded dance floor. It’s probably a lot of fun for some people, but it’s certainly not a place for lovers of a quiet craft beer!