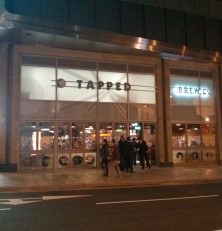 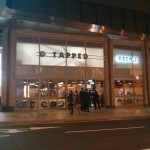 From the outside on Boar Lane you could even miss it.

It’s fair to say your Questers have been pretty excited about Tapped opening. Run by the now-legendary pub company Pivovar who run our favourite pubs in Sheffield and York we had very high expectations indeed, and of course we were there on its opening day to see if it lived up to them. 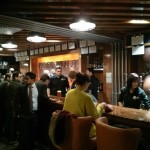 It’s like a beer festival. But it’s here every day of the year!

The Leeds offering is billed as an American-style brewpub and it’s hard to miss the 6-fermenter microbrewery along one wall, on display and very much a part of the pub atmosphere.

As soon as we got to the bar we noticed Tapped has far and away the best selection of on-tap beer we’ve seen on the quest. Hidden behind the bar (and labelled just like a beer festival) are 13 casks and 14 kegs (including a couple of ciders). Just like the brewpubs it’s emulating, there is a mix of their own beers (brewed in Sheffield station and on-site in Leeds), and beers from around Britain and the USA, including many of our favourite breweries. 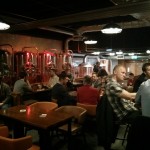 Microbrewery on site! You don’t see that everywhere.

And if the overwhelming selection of beer on tap wasn’t enough, there’s also a printed menu of 99 bottles to choose from, including lots of Belgian, British and American ales as well as a few others from Europe and one from New Zealand. Prices are very decent indeed, especially considering the quality of beer on offer — something we are usually happy to pay a high premium for.

In addition to the beer there’s real coffee and a pizza oven, with 12″ pizzas available in the £8-£14 range. And because Tapped is technically part of the Trinity site, you get access to their free wifi as well. Pretty much everything you need! 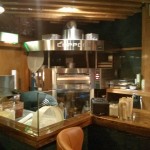 Fresh pizzas too. Is there any reason to ever leave?

The atmosphere is definitely new and shiny and maybe even a little bit sterile, but we’re expecting it to soften up a bit with age. The music when we visited was a selection of indie classics, which is always good for Rich. Sadly there’s no beer garden, but I guess when you’re on Boar Lane you probably want to stay indoors.

There were so many staff and everything was running like clockwork even on the first day. All of this is a great sign for the future, and we think Tapped thoroughly deserves its joint first place on our chart. If you are a beer lover, you must go there immediately and make it your new home.