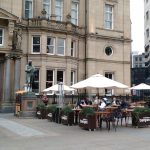 A nice big beer garden in beautiful City Square is the highlight.

Banyan is the latest city centre bar from the people who brought us The Pit and Manahatta, as well as a dozen or so other places around the north, including three other Banyan bars. It’s taken over half of the iconic Old Post Office, which it shares with The Restaurant Bar & Grill.

The general feel of Banyan is very similar to their other bars, with a very polished and slightly chainy feel. The emphasis here is on wine, cocktails and casual dining (there’s a large menu of burgers, salads and the like, a weekend brunch menu, and we were impressed to see a dedicated gluten-free menu) and it’s clearly going up in competition against its next-door neighbour for the business crowd. 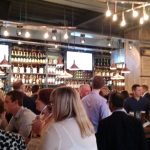 Beer-wise they have Camden Pale, Sharp’s Wolf Rock, Chieftain IPA, Blue Moon and Kozel and in bottles there’s also Brooklyn, Asahi and a couple of Thornbridges. That’s not a bad variety for a place that doesn’t specialise in beer but nothing you couldn’t find in many other bars.

It’s a huge space, with bars on two floors (the upstairs serves as a pair of function rooms when it’s not open to the public) and – perhaps its biggest draw – a giant beer garden spilling out onto City Square. I was impressed by the music choices – it was rather like being in a bar with my favourite Vintage TV on in the background. 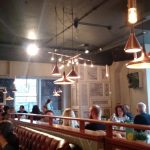 Some of the décor. It’s shiny but also a bit boring.

Overall, Banyan is not really for us: it’s quite corporate-feeling and a bit bland. But it’s also fun and casual, and we can imagine, especially coupled with its location, it’s going to be a huge success. We could already see it enjoying a much larger crowd than its over-pretentious neighbour on the day we visited, and that can only be a good thing.