All Bar One — Greek Street 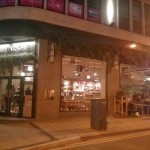 We’ve already reviewed the All Bar One in the Electric Press, and if you read that review you’ll basically get the idea of what this location is all about. The main differences are drawbacks, unfortunately, in that this space is much smaller and, while there is a beer garden, it’s just a narrow row of tables and chairs facing the traffic-laden junction of Greek Street and East Parade. Charming.

The beer selection is fine — a couple of decent kegs including Sierra Nevada and Meantime Pilsner, plus Brooklyn, Blue Moon and Grölsch Blonde in bottles. But like its sister branch on Millennium Square, the draw here is the wine selection and cocktails. The food menu is identical and does offer a nice range of snacks and full meals if you’re hungry. 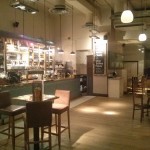 The interior is pretty similar to the other one. Just smaller.

What else can be said? There’s a giant clock hanging from the ceiling. There are newspapers. Yaaaaaaaaaaaaaawn.

Greek Street is definitely not our favourite spot in town and it must be said that All Bar One fits in perfectly on Greek Street. When it’s rammed with people out on the lash it’s unbearable and other than the decent menu there’s really not much to draw us here again.