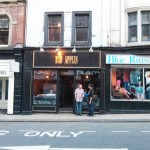 The outside is very unassuming.

Bad Apples is a rock bar. This is evident from the moment you walk in: the soundtrack varies from the familiar to the obscure but it’s all very clearly rock & metal music. Customers are invited to request songs, and the bar has a “NO emo, NO indie, NO Smiths” policy. I get the impression someone asking for This Charming Man would be forcefully ejected from the premises and barred for life. 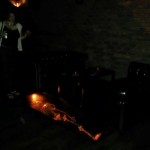 This was taken with the flash. Yes, it’s that dark down there.

It’s very dark in here. There are windows upstairs so you can see during the daytime. The downstairs area is a different story. There are candles and “flaming torches” but they don’t provide even enough light to read by. I’m sure this is intentional and very appealing to some customers (including us, on certain days). Set into the floor downstairs is a coffin containing an illuminated skeleton… They’re definitely not interested in deviating from any rock stereotypes! It’s also a small bar in a popular area, and the only one of its kind, so I can only imagine how busy it gets on a Friday night. 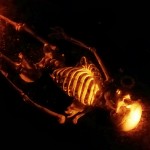 Everyone’s got their skeletons. Bad Apples put theirs right out there.

The beer selection is limited to a handful of bottles but it’s not bad. As well as some boring Eurolagers we found Punk IPA, Brooklyn, Anchor Steam and the legendary Duff beer (which I’ve never had — I’ve heard Homer Simpson isn’t exactly a connoisseur). A nice touch was getting our beers in frosted glasses. 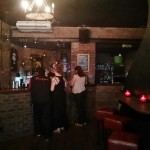 The upstairs bar area. What you see is what you get.

Prices are ~£3.60 a bottle which is par for the course on Call Lane, but you can get a 15% discount on “Wanker Wednesdays” by being rude to the bar staff and accepting an insult back. I love this concept, especially as it’s qualified by being in good taste — personal attacks are banned so you need to be creative with your insults. We didn’t visit on a Wednesday and the staff were very friendly: this isn’t a bar interested in alienating anyone who appreciates what they’re trying to do. It’s not somewhere we’d find ourselves coming back to often, but it’s really great that places like this exist in Leeds. If you’re into rock music, darkness or illuminated skeletons, you should definitely visit!