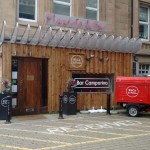 Our original picture of the outside was… er… a bit dark so here’s a daytime one where it’s very closed.

When one of our favourite restaurants moved out of this basement in a blaze of glory it was good to see an eccentric pizza place open in its stead. A little while later, Buca di Pizza has opened its own bar in the front half of this space. 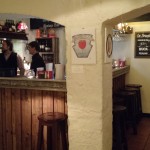 The bar. It’s in a basement.

Bar Camparino is named after a bar in Milan that says it invented the tradition of the apéritif … quite a claim! Its Leeds namesake doesn’t make any such claims but it can claim to have a very interesting drinks selection, including a handful of Italian craft beers at £5 a bottle (two from Birra del Borgo, and one from Baladin) as well as all the Italian staples like Peroni, Moretti and Menabrea, some of which are available on draft. Of course there’s wine and spirits and a handful of cocktails as well, but you know what we say about non-beer drinks… 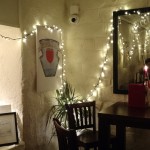 Some of the beautiful décor down here.

Although the focus in here still feels like the waiting area for the restaurant, Camparino is doing a fair bit to carve itself out as a drinking spot in its own right. In the large room to the right there’s a table football set (which was being played very enthusiastically when we visited) and there’s also a small stack of board games available for people to play. There’s even a little beer garden at the front for sunny days when the basement just isn’t enough.

Bar Camparino is a very chilled out place – even on a Friday night – with friendly staff and lots of comfortable seating in a beautiful atmosphere. It’s a little bit pricy for us to make it our #1 regular haunt but we’ll be back here often, especially if we fancy a pizza after our drinks!