Home » Bar reviews » Be At One 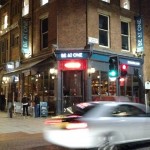 Be At One with the neon.

Expectations for Be At One were low. Very low. It’s a new clubby nightspot in the Electric Press, replacing the doomed Japanese restaurant Teppan 260. We visited on a Friday night, and the place was alive with loud music and people drinking cocktails. There were no beers to be seen so we had to ask. No taps, but a few bottles hidden in their stainless steel refrigerators, including Brooklyn Lager, Pistonhead, Leeds Hellfire and Sagres. 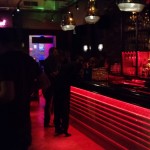 Be At One with the darkness.

Their real focus is cocktails, and they have some unusual ones. Irish Disco Biscuit, Blueberry Muffin, and—my personal favourite—the Svenska Detox, which features kale. KALE!

The atmosphere is not typical to our taste, though as we stayed there it grew on us a bit. It’s a complete meat market, but a meat market for grown-ups. Pop music mostly from the 1980s adds a nice soundtrack for the gender-balanced crowd mostly in their 30s and 40s. It’s a fun atmosphere for a drink and a dance, and maybe even to meet your next special someone. Or at least a right-now someone. 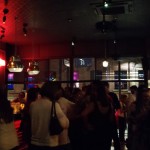 Be at One with the loud music and the crowd.

They haven’t put much effort into providing a good range of beers, but we’ve definitely seen worse.