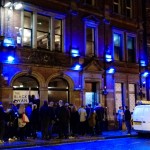 They were giving away free pizza. There’s a queue. I think they may be connected.

The former BRB on Call Lane has had a new lease of life as part of a mini-empire that also includes Sandinista!, Blind Tyger and Smokestack. And what a change it is: upstairs especially the whole place has been gutted and refitted from scratch.

Black Swan feels like an attempt to unite two increasingly divided cultures in Leeds: the rowdy, late-night Call Lane culture and the subdued beard-toting craft beer culture (you know which one we belong to…) And it seems to succeed at this, at least judging by the crowd on their first night. 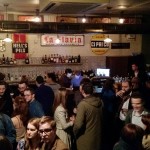 The downstairs bar. Still recognisable from before.

The beer selection is very extensive, especially for this part of town. Alongside the usual junk, there were a handful of interesting beers on keg, including Ilkley Rombald, Summer Wine Rouge and Flying Dog’s Raging Bitch. But the real magic is in the fridges, with bottles from BrewDog, Great Heck, Sierra Nevada, Camden, Bristol Beer Factory, Brooklyn, Odell’s, Harviestoun, Sly Fox and more. Really not what you expect to find on Call Lane! 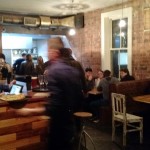 The upstairs bar. What a transformation!

The space is massive, spread across two floors. There’s a bar and a kitchen on each floor so even when it’s really busy it seems like you don’t have to wait too long to be served. The staff are really nice too, which is always a bonus. Décor is “found objects”, exposed brickwork and stylish graffiti: my own favourite bit being a unit for two cask taps just lying around in the main seating area upstairs as a piece of furniture. There’s also a back door upstairs that leads onto some sort of giant fire-escape that may be used as a smoking terrace or even a beer garden in the future, but it wasn’t clear. 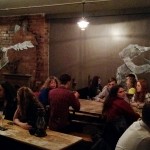 Food is sourdough pizza and Yorkshire classics designed by the same Anthony who formerly ran the legendary Anthony’s restaurant chain so you can hopefully expect something a little more than pie & peas, although we didn’t try it yet.

It takes quite a lot to convince us to really like a bar in this part of town, but Black Swan seems to have nailed it with the right combination of beer, atmosphere and staff. We’ll be back! (Just not on a Friday or Saturday night… nooooo.)