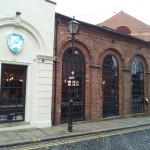 Your Beer Questers have been anticipating the BrewDog Brewery opening their Leeds branch since we first heard about the possibility back in January 2012. After a lot of back and forth about whether they would get their license approved, we were thrilled to hear that they were set to open on 14 March 2013. We wasted very little time and visited two days later. 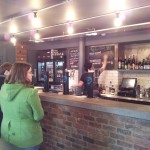 I had to stand here for quite a while trying to decide where to start.

If you read their website or their manifesto, you’ll learn quite quickly that BrewDog are complete beer snobs, taking the attitude of “our beer is awesome and if you don’t think so you don’t know what you’re talking about.” The thing is: they’re right.

Their line of core varieties as well as limited editions are all amazing, and the Leeds bar has an impressive selection of both. There are eight kegs, including two guests (a Mikkeller and a Wild Beer Co when we went). They were having lots of problems with their gas supply, so the taps were a bit hit and miss, but hopefully that will not be an ongoing problem. If it is, you can always resort to the fridge, which was stocked with about ten other BD varieties plus an astounding selection of other craft beers. (Too many to list — take a look at the photo!) 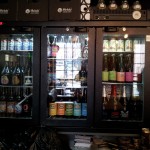 This refrigerator is beautiful.

This location doesn’t plan on having a full kitchen, so food on offer is pork pies, meet and cheese platters, scotch eggs and crisps. It’s good value and definitely important to have available, especially as many of their beers’ ABV is in double digits. In our opinion the atmosphere beats Manchester’s BrewDog hands down, with lots of light, a spiral staircase leading upstairs, exposed brick work and wooden beams, and a loft space that the staff have to climb up and down the wall to get new stock down, which is quite a sight. There are also sockets available at the booths, which is always a nice touch. I could live without the door to the toilets being labeled “pubs and bitches,” though. I get it — it’s on the “dog” theme, but it’s still problematic. 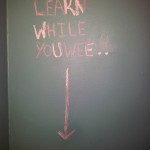 Some playful graffiti in the toilets.

Now, let’s talk value. Yes, a bottle of Anarchist Alchemist set me back £12.50, but it is 14% and really good. The lower alcohol ones are more in the £6 range, so it’s not the place to come if you’re on a tight budget. But considering how high the quality is, we don’t feel it’s overpriced, and you’re certainly spoilt for choice.

We have no doubt that BrewDog will thrive among Leodiensians, and hopefully they’ll work through their little teething problems so they can consistently deliver the quality and variety that they pride themselves on.