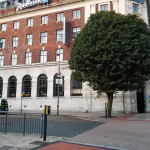 It’s a tree. Also, there’s Browns behind it.

Browns is something of a British institution, apparently. By all accounts they’re quite an upmarket chain of bar/restaurants in the south, with branches in Covent Garden and Mayfair, but up here something doesn’t quite work.

Housed in the former Leeds Permanent building that became the cornerstone of The Light, Browns still retains something of that old elegance, but it’s faded and worn, probably not helped by the hideous modern ceiling bisecting the walls — presumably so they could get more rooms into the hotel next door. The atmosphere in Browns is the opposite of shabby chic — it’s broken elegance. 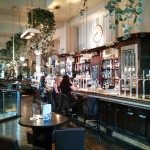 It’s a really long bar. Shame all the taps are the same.

That said, the place is massive and it’s got lots of booths and places to have a gathering if you wanted one. The (table) service was spectacular when we visited but I’ve had less-than-ideal experiences in the past, so your mileage may vary. You can get food most of the time, even on a Sunday night when pub food is hard to come by. The menu is British classics and the prices are not too insane. There are also bar snacks in the form of “finger food with friends”. 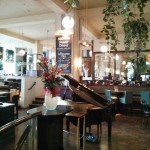 Loads of space in here!

There are a few keg beers here but they’re mostly similar lagers (as well as the thoroughly boring Theakston’s Best). One interesting choice was Korev Cornish Lager. The menu promised Sierra Nevada, but we didn’t see it.

They do have a live pianist to accompany drinkers several nights a week, which is not something you see everywhere.

We didn’t find lots to recommend at Browns other than its opening hours and space. If you’re in the mood for lots of different similar lagers or a brasserie that’s not insanely posh then this might be a good starting point.