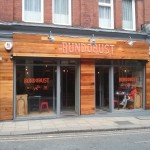 The front gives a hint of what’s inside.

It’s been open a week and it’s already home to us. At least one of your Questers has been in Bundobust for 5 days out of its first 8, and with no sign of getting bored yet.

Bundobust (Indian English, “arrangements or organization”) is a collaboration between the legendary Sparrow Bier Café in Bradford and Drighlington’s Prashad, bringing together two of our favourite things: craft beer and street food. 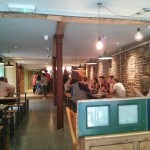 There are 12 kegs here, and most of them are assigned a specific brewery. You’ve got local legends Saltaire, Kirkstall, Magic Rock and Northern Monk alongside international favourites including (in my opinion) the unbeatable Mikkeller.

In the fridge you’ve got a lot more choice including lots of BrewDog, Sierra Nevada, Mikkeller, Fourpure, Brooklyn, Founders, Siren, Wild Beer Co., To Øl… In fact, for such a small fridge it’s hard to believe the beer selection is so good. They’ve also just added a handful of gluten-free beers, and there’s something called a “hop randall” that they use to infuse one of their beers with fruit. Everything is quite reasonably priced for what it is, but of course if you’re an expensive Mikkeller beer fan like me you’ll still break the bank… 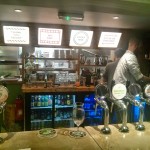 Sneaky picture of the beer fridge.

Apart from the beer the other draw is the food. The offerings are all served in paper cups and cost between £3 and £10. The menu is pretty extensive and it’s all vegetarian with some vegan and gluten-free options as well. Food is served incredibly quickly and we find ourselves eating rather too much of it every time.

There are also cocktails, lassis and wines on the menu if you fancy something other than a beer. 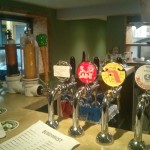 The mysterious hop randall is on the left there.

There is an indoor and an “outdoor” seating area. Outdoors is almost entirely covered, so it’s kind of “indoors with smoking”, really, which is a bit of a shame although I’m sure it’s a massive boon to smokers when it’s raining. Seating is mostly long benches, which we’re not very fond of, but there are a few chairs with backs if you’re lucky enough to get them! There are also power points at every table. We didn’t see wifi advertised; we’d assume they’ll offer it but we were afraid to ask in case we had another reason to spend all our time and money here. 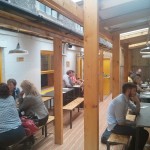 The staff are great, the atmosphere is chilled out and the music is good too (even if we did hear the same songs every time we came). Bundobust is a really great addition to this part of town, which is fast becoming our favourite part of town. Welcome!