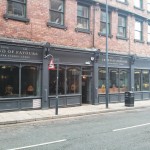 This Leeds Brewery branch takes up the entirety of Harper Street.

Crowd of Favours is the newest addition to the city centre by Leeds Brewery, and your questers were keen enough to visit it on its opening day. Being big fans of the other members of the franchise, we expected to see a fine selection of real ales, good food and a lovely atmosphere. We were definitely not disappointed. 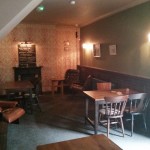 This ain’t your grandma’s living room. (Wait — is it?)

We were first struck by its size — it’s one of those places where you keep discovering little room after little room. There are five separate seating areas upstairs, all of which are inviting and feel like someone’s living room. There’s also an entire downstairs with exposed brick arches and unfinished concrete floors that feels like — well — someone’s basement, but it works. The whole décor seems to be traditional pub meets modern bar so you’ll see giant graffiti next to a fireplace next to some leather sofas next to a real settle. 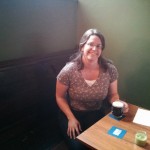 So much seating to choose from! I settled on this settle.

The bar, which is accessible from all sides, has four casks from Leeds Brewery plus four guest ales. Interestingly it’s the only place we’ve reviewed so far that has absolutely no bottled beer whatsoever, but the Brooklyn Lager, Flying Dog Doggie Style, Moa and Bacchus on keg should be enough to keep the non-CAMRA crowd happy too. 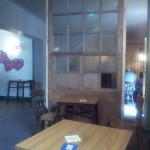 I loved this false wall separating two of the rooms.

They’re not short on amenities or events, either. Downstairs will be the spot for dancing on the weekends as well as the “Secret Cinema” on Tuesday nights. There’s also a weekly quiz and a takeover by a different brewery once a month. We ate from their lunch menu which was quite tasty, and they have a separate dinner menu plus fondue which we’ll have to try on another visit. And I’m always happy to see a new place that serves breakfast late on Saturday and Sunday (4pm!). 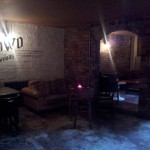 The vibe downstairs is quite different from upstairs.

Situated directly between the Duck & Drake and Outlaws Yacht Club, Crowd of Favours might be hoping to catch the overspill from both. But with a unique flavour and so much to offer, we predict that this place will become a crowd pleaser in its own right. (See what I did there?)