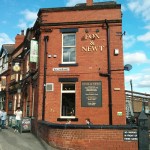 Could be any other pub from the outside.

Unless you’ve heard about it, you might pass the Fox & Newt on Burley Street and think it was just another aging alehouse. In fact, it is the last survivor of a tradition of city centre brewhouses: that is, pubs that brew their own real ale for consumption on the premises.

This historic building still retains its traditional look externally but has been given a modern airy finish inside. There’s one long room in three parts with a lot of natural light throughout and there’s a beer garden at the side and back.

They serve three of their own beers at a time (they brew four) alongside two guest ales (which were both from the amazing Marble brewery when we visited). Their own brews are not modern super-hopped craft beers, but traditional sessionable casked ales served at a very reasonable £2.30 a pint. As well as the cask we spotted a handful of decent beers in the fridge, including Punk IPA (£3.50), Vedett, Leffe and Asahi.

There are events here in the bar area. Comedy (“Chortle Kombat”) is once a month on a Monday and there are regular music gigs including a monthly post-rock night called “Bad Owl presents…”. When there’s no music on they have one of Rich’s favourite internet jukeboxes with thousands of songs to choose from. 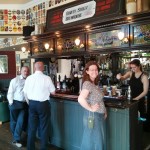 The sign above the bar gives away that this is no ordinary pub.

The Fox & Newt also has an extensive food menu, including several very unusual meats in their “safari burgers” range. The food is crazily cheap, including an even cheaper “austerity menu” with full meals around £3.50. Even their insane 16oz burger won’t break the bank.

The location is close enough to the centre of Leeds to walk but is far from the usual crowds. There is a lot of student accommodation nearby so the Fox & Newt may (deservedly) get pretty rammed at times but it was nice and quiet when we visited.

We were very impressed with this place. They had most of what we’re looking for in a good modern pub. The beer selection isn’t the greatest, but they get loads of bonus points for brewing onsite! And the list of amenities is almost the best we’ve seen so far. If you’ve never found the time to pop across the ring road to this gem, you should check it out!