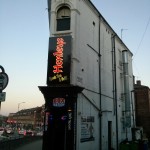 Getting in on some of the Leeds “Northern Quarter” action.

Henleys Sports bar is the reincarnation of the Black Diamond strip club, at the top of New Briggate. A dedicated sports bar is a niche in this part of town, so we were intrigued to see it, though fairly certain it wouldn’t tick very many of our boxes.

Let’s start where we like to start: the beer. It could be worse, but not by much. The only acceptable tap serves John Smith Smooth, and the only acceptable bottle is Tiger, despite the landlord assuring us “we have every bottle you could want.” (I think he has not ventured as far afield as North Bar down the street or Belgrave across the road.) Not that we had particularly high expectations, as sports bars seem to suffer the same problem as the gay bars in this town: do owners assume that sports fans don’t like good beer? 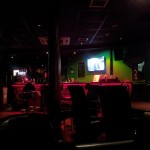 The bar area on the main floor. Dark, but comfortable.

And how about the atmosphere? The Yorkshire Evening Post got there before us with a review, and it does seem Henleys took to heart some of their feedback regarding it not having shaken its strip club persona. They put in new furniture and fittings and removed the pole. There are plenty of tables and leather seats, making it feel more like a casual restaurant than anything else. The first floor has a giant TV screen as its centerpiece, with chairs facing toward it in a viewing area. There are three smaller screens on the wall, one of which was playing MTV during our visit. So if sports and inane pop music are your thing, come on by! 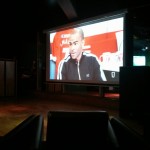 We think the value is good, though the prices were a bit unclear. I paid £2 for a “half pint” of John Smith’s (really just a tumbler), and the bartender quoted a £2 price tag for Rich’s Tiger, though he may have actually gotten charged £3.50. 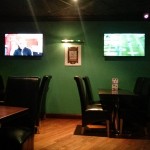 The menu, though we didn’t eat, pairs well with watching sporting events: nachos, wings, burgers, etc. I wouldn’t be against trying the food, if we ever came back. However, the pushiness of the owner (once he found out we were writing a review, which we normally try to keep quiet) put us off a bit. He begged me to try a cocktail even after I’d told him I’m not a big cocktail drinker and we pretty much just had to walk away from him after he wouldn’t take a polite no for an answer.

So in summary, Henleys seems like a perfectly decent place to come and watch sports if you’re not picky when it comes to beer choice. We wish it all the best. But being fans of good beer and not fans of sports, we won’t be rushing back.