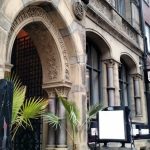 The outside gives a glimpse of the opulence within.

Ibérica is a chain of upmarket Spanish restaurants from a Michelin-starred chef, and this one has a bar attached so it definitely qualifies for the Quest!

There’s no denying that Hepper House (built as an auctioneers) is an incredibly beautiful space – rivalling even the Tiled Hall or County Arcade – and we imagine it will be a great place to bring anyone who falsely accuses Leeds of being ugly. And I’m not exaggerating when I say the toilets are the nicest toilets I have ever been, anywhere in the world. 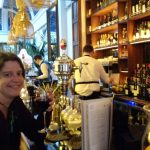 We sat at the bar. You can see the super-fancy restaurant behind.

The bar seating area (mostly Chesterfield-style armchairs) is quite small and it was packed out when we visited, but there was space for us to sit at the bar and chat with the bartender who was very friendly and professional. 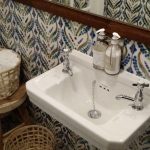 Inside a toilet cubicle. These toilets were so nice I had to photograph them.

Unfortunately, as you might expect from a Spanish restaurant, the drinks menu is mostly wines and cocktails (as well as a selection of Asturian ciders, called sidras). Beer is very much an afterthought, with Mahou on draught and Alhambra in bottles… very disappointing, especially as we know the craft beer revolution has hit Spain.

Food is also not available at the bar (apart from some complimentary olives) so while we’re sure the restaurant is great, we can’t count it in our review. 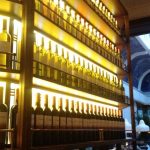 Many bottles! None of them craft beer.

We can imagine this will become one of the go-to restaurants on Leeds for upmarket dining and judging by its popularity when we visited it will also be a good place for the cocktail-/sangria-/rioja-drinker. But for beer drinkers like us, I’m afraid it has a way to go.