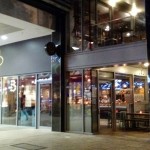 In the Arena Quarter? Stop on by…

The Arena Quarter — yes, that’s what it’s called, apparently — is starting to become an actual quarter, with new bars, restaurants and cafés opening up to cater to the First Direct crowd. LAB is one of these places, occupying the very top end of the Merrion Centre. It’s owned by the same group that runs Hirst’s Yard and Brooklyn Bar, among others, so we had some preconceived notion of what we might see. 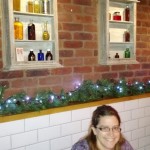 As the name implies, the theme here is science. There are flasks on the shelves, periodic tables of cocktails and coffees, and the empirical formula for alcohol (C2H6O) on one of the walls. With worn wooden furniture and exposed brick, however, it escapes the sterile feeling of an actual laboratory and provides a nice rustic feel. 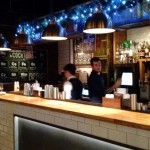 You’ll see some kegs and casks behind the bar. Who cares which is which?

While the beer selection is above average, we got the feeling that it’s not aimed at people who actually care about beer. For example, the draught menu just lists “Magic Rock” without specifying which Magic Rock (it’s Ringmaster), and there’s no indication of which ones are cask and which ones are keg (Magic Rock and Whitstable Bay are casks; Asahi, Darling Buds and Oranjeboom are keg). We were also pleased to see three Camdens, two Brooklyns, two Flying Dogs and a Founders in the fridge. 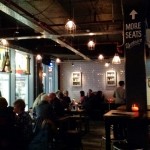 LAB has not one, but two beer gardens — one upstairs and one downstairs, so that always scores extra points in our book. There’s a full menu offering chicken and burgers and such, but we didn’t try the food on this visit. While we would definitely come back, there’s a certain je ne sais quoi that kept us from getting overly excited about it. The atmosphere is pleasant enough but slightly soulless. It’s a bit like a Call Lane bar that’s aged fifteen years: mature, relaxed, and the place to get a drink before going to see Fleetwood Mac’s reunion tour.