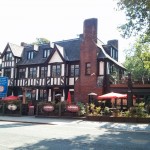 Really one of the most amazing buildings in central Leeds.

Lounge Bar & Grill occupies St John’s House — an absolutely spectacular half-timbered building that actually only dates back to 1930 (parts of Nash’s restaurant next door are more than 2 centuries older) but built specifically to look like the many much older buildings that were destroyed when The Headrow was built. 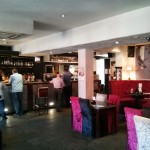 But what’s going on inside? Such a shame.

This is a huge building with a large bar area downstairs, restaurant upstairs, beer garden at the front and an impressive roof terrace at the back, which is very nice indeed on a sunny day. The beautiful exterior is sadly let down slightly by the interior which would have been ultra-modern 10 years ago and doesn’t match the style of the building at all. It feels sterilized slightly with no rough edges, like a hotel. And the chairs are giant. Not sure what that’s about. 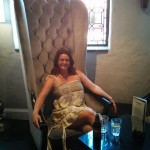 I shrunk Emily for this picture. Or is the chair really that massive?

How about the beer? Here the Lounge definitely gets some points. There are 2 cask ales from Kirkstall Brewery and several craft bottles including Sierra Nevada (Torpedo and Kellerweis), Anchor Steam, Goose Island and one from Meantime. There’s also Estrella, Guinness and Tetley’s on keg if that’s your thing.

The list of amenities here is as long as my arm. They have a full food menu including barbecues on the terrace, Sunday roasts and their famous “iPhone quiz” once a week where patrons are encouraged to cheat. It’s also the home of several local meetups.

Lounge Bar & Grill doesn’t feel like it belongs on Merrion Street. It’s certainly reaching out to a different crowd than the other bars on this street, but it seems to do very well out of it. I don’t have much else to say about this place. It rates well but funnily it’s not somewhere we see ourselves coming back to regularly unless we want a beer in the sun. 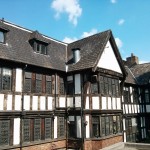 A closeup of the building from the back. 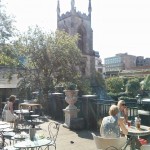 Great view of St John’s church from the terrace. 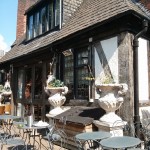 Another picture of the terrace. I promise this is the last one!