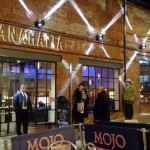 Definitely not a quiet hideaway.

The owners of The Pit have decided to capitalise on its success by opening a companion bar next door. While The Pit is going for a “Southern barbecue” feel, Manahatta is aiming for downtown New York City.

The most immediately obvious thing is that Manahatta is huge. Really huge. There’s a downstairs restaurant, an upstairs lounge bar and a smaller middle “library” floor that can be hired. 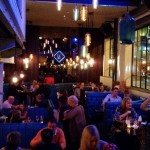 Lots of people eating on the restaurant floor.

The look and feel is obviously trying to be art deco, in a sort of slightly tacky chain-pub way, and of course because it’s “New York” the emphasis here is on fancy food and cocktails, not on the kind of casual dining and beer we normally like. 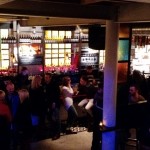 Beer is pretty much sewn up by Thornbridge, with AM:PM and Chiron on tap and Jaipur and Kipling in bottles. There’s also Brooklyn on tap. It’s not a bad selection really, but we have a really hard time with what Emily has taken to calling the “schooner scam”, where beer is served in only one size — two-thirds of a pint — for the price of a pint elsewhere (£3.90). We’d mind it less if they were actually schooners (curved glasses with a stem) but they’re just small pint glasses. 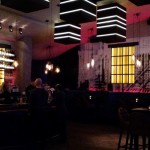 The upstairs cocktail lounge. Swanky in a soulless way.

I have no doubt that Manahatta will be really popular: they’ve got their target audience sorted, but there is nothing here for us. It’s too “fake upmarket” and cocktaily for us.  And I doubt the owners will care, since they also own the much more pleasant and downmarket bar next door too.