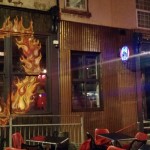 A Ring of Fire. Don’t fall in!

One day in late 2015, The Reform closed its doors for a short while and re-emerged as the Mean-Eyed Cat Bar. The management is the same, but so much has changed that it’s worthy of a review in its own right. It’s taken us a while to get here because it’s closed on Mon/Tue, so keep that in mind if you’re planning a visit. 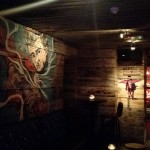 If you are scared of giant country singers, don’t come in here.

Mean-Eyed Cat is a Johnny Cash-themed (and, by extension, US South-themed) bar, and they definitely don’t do it by halves. From the four rotating Wharfebank beers named after Johnny Cash songs, to the lyrics dotted around, to the very clever Walk / The Line sign, to a Ring of Fire in the window, you might be hard-pressed to think of a Johnny Cash reference that isn’t covered here. In spite of the kitsch, it’s actually a pretty cool environment and we felt very comfortable there. 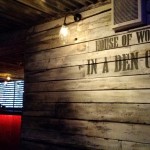 So, yeah, this song’s actually about a prison chapel but OK.

As well as 3 Wharfebank beers on keg, there’s also Blue Moon, Coors Light (yay) and a cider. In the fridge there’s beers from Founders, Goose Island, Flying Dog, Stevens Point, Pacifico and some Southern beers like Dixie and Lone Star. The beer was pretty pricey, but like its predecessor you get free pizza when you order between 5 and 9 pm. 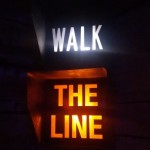 See what they did there?

The music here is really good (what did you expect?) and it seems to be a favourite place to come dancing later in the evening. I suspect when Merrion Street is at its busiest it’ll be difficult to move, but it’s very pleasant on a weekday evening. 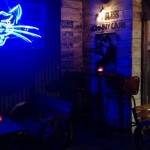 Those eyes do look pretty mean, to be fair.

While we don’t normally go in for cool Northern Quarter establishments, Mean-Eyed Cat ticked a lot of boxes so we may be back, especially if we’re in the mood for listening to the Man in Black.