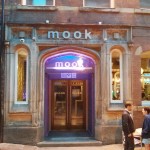 One word that’s not normally used to describe bars in the Call Lane area is modest, but I’m about to use it. Mook is a huge bar/club right in the middle of Hirst’s Yard. We’re not exaggerating when we say it’s huge: there are lots of side rooms with communal seating and a dancefloor in the middle. The decoration is cool but not excessive; well, I say not excessive… the club version of Leonardo’s Last Supper with Jesus on decks is maybe a tiny bit over the top. (No picture: you’ll have to visit to see it for yourself.) 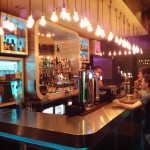 It’s a bar. It has some drinks.

While Mook is cool, it’s also modest. The staff are nice to uncool people like us, and they each list their favourite things on the website, unafraid to mention competitors’ bars in their lists. They’re also happy to play music that people like, and they even have an indie club night once a week — something I’d never have expected to see in this part of town. 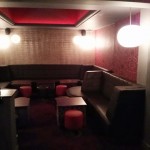 One of several large seating areas. 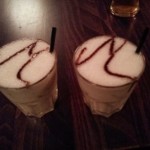 If this was Leeds White Russian Quest there would be points.

There’s not a lot to say about this place, really. Obviously it’s not a place for beer lovers but they know that: it’s a place for any kind of people who want a place to dance and/or chill out without feeling like they need to fit in.