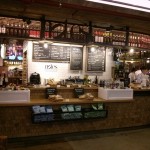 In the middle of Trinity Kitchen you’ll find this café-slash-bar-slash-restaurant.

We recently did a Trinity Kitchen pub crawl of sorts, as there are three new places to drink beer there. First let me say this: if you haven’t been to Trinity Kitchen yet, it really is worth a visit and repeat visits. While the words food and court placed next to each other usually invoke an image of tacky cheap fast food chains, the planners at Trinity have really got it right and put a new twist on the traditional boring food options you find in most modern shopping centres. While the permanent fixtures are all chains from down south, they’re all quality new places for Leeds and there’s no Subway or Burger King in sight. 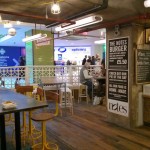 They don’t exactly shout about their beer selection, but it’s there if you look closely.

Among those fixtures are three “bars,” in quotes because we debated whether to review them distinctly or altogether. Eventually we decided on the former, since they each have something unique to offer. The first we tried was Notes, a mix somewhere between a café and a pub restaurant. The first thing we NOTEiced was freshly brewed coffee but if you look more closely you’ll see they also have a small selection of bottled ales, all Yorkshire-born and -bred: two from Ilkley (and unusual ones!), two Nooks and one Kirkstall. And if you’re after a mediocre Eurolager you can also grab an Estrella. 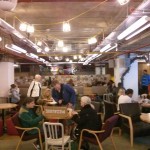 It’s got its own very comfortable seating area.

The atmosphere is decent enough, though the whole area is often heaving on a weekend and it can get very noisy at peak times. However, being that it is a food court, you can get a bite from any of the merchants so that’s definitely a point in the amenities column. It’s not exactly a beer lover’s haven, as the ale was served too cold and in small plastic cups at £4.50-£5 a bottle, but maybe this could change with a little customer feedback. So while we wouldn’t really come here just for the beer, it’s nice to know this handful of local ales is available in case that’s what we’re in the mood for when we come to eat.