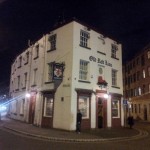 We admit: we had a lot of preconceived notions about the Old Red Lion. Possibly because it’s on a rather desolate strip of land and from the outside it looks like it might be a bit of a shabby rough place. Let me take this opportunity to apologise. We were most pleasantly surprised to find a charmingly cosy and friendly Edwardian pub.

Despite the windows being engraved with large Sam Smith’s logos, we didn’t actually know ahead of time that this was part of the Sam Smith’s family. This means of course a good selection of their line of beers, though it’s not quite as varied as a place like The Angel. (They don’t have stout, for instance, but you’ll find most of their other bottles and draught beers.) 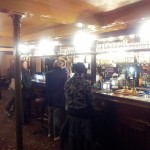 The bar is very bright — all the better to see all the beer with!

It’s got a very traditional “village pub” feel to it and is definitely well-maintained. Photographs of twentieth-century Leeds cover the walls, adding to the localness of it all. It seemed to be full of regulars when we visited, but they were all very welcoming and friendly to us as outsiders. It’s unclear how crowded this place gets, but with four separate rooms, you’re likely always to find a seat (and a game of pool if that’s what you’re after). 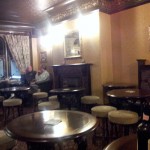 The largest of the four rooms.

Typical of Sam Smith’s pubs, the amenities are few and far between — no food except for their own brand crisps and pork scratchings, and you won’t find an espresso machine behind the bar. It’s great for having an involved conversation, though, as they don’t even play music! It’s the kind of place you might doze off if you got too comfortable. And if you did, we suspect someone would just politely nudge you at closing time.