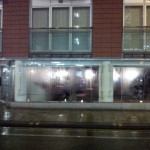 This is really what it looks like from the outside on a cold day. Look for the steamy windows.

The “social club with craft beer” style of bar is very fashionable right now, and I can’t say we’re sad to hear a new one has popped up in Leeds, on New York Street over by the bus station.

The first thing you notice about Outlaws Yacht Club (once you’ve found it behind its extremely unassuming exterior) is that it’s in a hair salon. Well, it shares its space with a hair salon. I’m not sure if this is a first, but it’s certainly the first I’ve ever seen. If you’re ever in the mood for a late night haircut and a pint of Brooklyn, you know where to come. 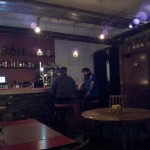 The space is arty in a “found objects” sort of way, with a 70s feel. There are huge cushioned benches with mirrored backs, hundreds of glitter balls and a deer skull. The usual fare. There’s a good variety of places to sit, from sofas up to proper tables and (also fashionably) board games are provided. Like most of these social club places, Outlaws serves as a café during the day with coffee and cakes, works its way through being a bar and ultimately ends up as a club with DJs several nights a week. There are also other things on, including a quiz and a performance poetry event.

The beer selection is almost exclusively craft beers. Brooklyn is on tap and the fridge has a number of favourites including beers from Left Hand, Flying Dog and Sam Adams, as well as a Belgian ale I’d never seen called Bellerose. Estrella and Becks Vier are provided for any drinkers of boring beer. There’s no real ale, but that’s not what this place is aiming for. The staff are very friendly and care about beer, which is always a major bonus. 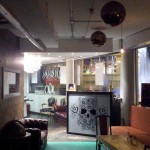 The bar and hair salon really do merge in the middle.

There’s a light food menu, with toasties and sushi as well as a few nibbles like olives. You probably wouldn’t come here for dinner but it’s a nice bonus and would be enough to sustain you if you were coming here for a long afternoon event.

Outlaws definitely has the potential to become Leeds’s next big thing. If they’ve started as they mean to go on, we’ll definitely be back again and again. Especially when our yacht arrives in the post.