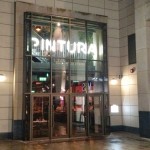 A new member of the Trinity food & drink club.

Trinity has added a new bar and restaurant to a unit that so far has been empty since the opening of the shopping centre. To get there, enter from Lands Lane and look for the white neon Pintura sign on your left, just before the entrance to M&S. It’s a pretty massive space, with the restaurant covering the ground and first floors, and the “gin bar” in the basement. 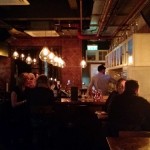 We’re not here for the gin, of course, but since they serve beer they do qualify for a visit. If you like Spanish beers you won’t be disappointed, as they have six to choose from, including the unusual Er Boqueron with its signature seawater flavour. Beyond that however, it’s a bit “meh.” It takes more than Mahou and Estrella to get us excited, and the value is nothing to shout about either (bottles in the £5 range). 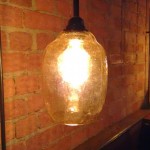 The atmosphere is dark and cool, the staff are friendly and attentive and the music selection is up our street (think indie BBC6 stuff). You can also get food from the kitchen upstairs but we didn’t partake. The extensive wine and gin lists are definitely the draw here, so it will appeal to some people but not us. So while there’s nothing objectionable about Pintura, we just found it a bit forgettable.

Trinity’s website describes it as “the first of its kind in Leeds.” Whoever wrote that doesn’t seem to know about Bilbao in Granary Wharf. With a more interesting vibe and better value, if we’re in the mood for a Basque tapas bar, that’s where you’ll find us.