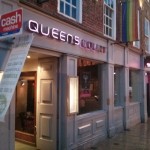 It’s a pretty plain exterior but you can’t miss it.

Queens Court is perhaps the most well known LGBT bar in Leeds. It’s certainly busy: even when we visited, on a Monday, there were so many people standing at the bar that I couldn’t get a good photo. On a Friday or Saturday night you can’t even move through the courtyard for people. 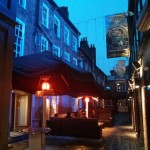 The eponymous court. Not shown at normal busyness.

It’s a really big space with several rooms downstairs with loads of seating, a large courtyard (with sofas!) and a dancing/events area upstairs. It has a reputation as a welcoming, safe space for everyone and it lives up to this reputation. Beyond the warm welcome, though, the atmosphere is pretty bland and chain-bar-like (it’s owned by the masters of bland, Stonegate Pubs). Food is served, and there’s a big menu including a curry pie(?!) and the ever-popular curly fries (here called “spiral fries”). The music is chart pop music played quietly during the day and loud at night: inoffensive but uninteresting. 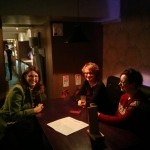 We are so happy to be drinking such great beer.

Where Queens Court is a real let-down is in its beer selection. The only passable beers are Peroni and John Smith’s keg, neither of which earn it more than half a star. There are plenty of other boring lagers, ciders, alcopops and brightly coloured spirits, and the value is pretty good, but that just isn’t going to be enough for your questers.

Unfortunately, Queens Court — like every other LGBT bar in Leeds — has fallen prey to a stereotype that queer people don’t drink good beer, which is patently untrue. Given how popular this place is, and how few LGBT bars there are in Leeds, isn’t it time someone opened one that sells half-good beer?