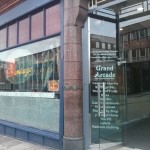 This window lets light in. Unusual for a rock bar.

The Grand Arcade is an area of Leeds that has seen a lot of rejuvenation in recent times, but one fixture that’s steadfastly remained is Santiago. 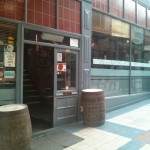 This is the front door. You could stand out here if you love watching the clock.

This bar is one of the stalwarts of the Leeds rock scene, and the only one in this part of town. It’s very much a come-as-you-are, chilled out sort of place, with plenty of classic (and not-so-classic) rock playing all hours. There’s a main bar area and two further rooms upstairs that can be hired and also regularly host DJs and gigs from up-and-coming bands. They’re apparently also famous for their aftershow parties, which follow on from gigs by bands I’ve only heard of in passing. 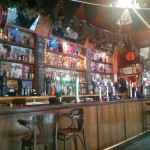 The bar. There are a lot of spirits!

The bottled beer selection is certainly not as bad as it could be: we saw Brooklyn, Punk IPA, Hobgoblin, Anchor Steam and several other decent beers, although you’re unlikely to find anything too non-mainstream in the fridges (and you can forget about the taps). Santiago prides itself on its hard liquor selection but that’s not an area we know anything about! 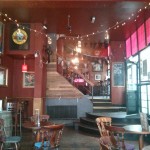 The staff are very friendly — and witty: the bar is famous (world famous, even: it’s been on Buzzfeed) for its tongue-in-cheek blackboards that are always changing. Be careful about trying to go straight after work, though — Santiago doesn’t open till 7pm and it’s closed on Mondays. 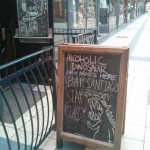 The not-so-hot beer selection and the distance from our usual part of town might keep us away from Santiago, but I think it’s got its own demographic sewn up. Long may it last! \m/