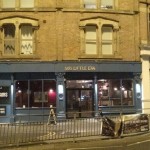 What was it again? John’s Tiny Potato?

This great spot on Leeds Bridge opposite the Adelphi has been vacant since Empire was forced to shut its doors over two-and-a-half years ago, so we were very happy to hear this contender for the oddest-named bar in Leeds had appeared. 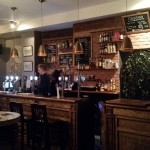 The upstairs bar is warm and welcoming.

Sid’s Little Egg (named for the owners, one who looks like Sid from Ice Age, and one who looks like a little egg… apparently) is actually a pair of bars split over two floors: on the ground level is a beautiful cosy little speakeasy-ish room with art, sofas and exposed brickwork, while the basement is more of a sports bar with a polished black bar area, giant-screen sports, a pool table and arcade/fruit machines. Something for everyone, then! 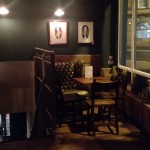 The beer selection is small but excellent, with one cask (it was Rooster’s Yankee when we visited), 2 Ilkley and 2 Northern Monk kegs, and a handful of other less-interesting international kegs. There are a few interesting beers in the fridge too, including a couple of Flying Dogs and several from Monteith’s in New Zealand. Prices are not the best in Leeds, but £4.30-4.60 for a craft pint isn’t too bank-breaking. There are also several gins and cocktails for those disposed to that sort of drink. And there’s a wide range of coffees available, all made with coffee from local heroes North Star. 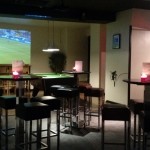 Downstairs isn’t our scene but it’s great that there are these two sides.

Food is a casual affair provided by the Caribbean Café from Kirkgate Market and is very good value (where else are you going to get a jerk chicken wrap and potato salad for a fiver?)

There’s not a lot more to say about Sid’s Little Egg other than that we really liked it here. The upstairs bar is just the right kind of atmosphere for us, and with enough great beers and good food this is one for our favourites list.