Author
Users
This bar has changed name since we reviewed it. It was called Spice Bar at the time. 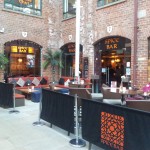 The bar’s entrance and beer garden in The Electric Press courtyard.

Spice Bar is probably the least well known bar in The Electric Press. It belongs to the Spice Quarter buffet upstairs, but maintains an identity of its own as a kind of classy cocktail lounge.

The first thing we noticed is that it’s really dark in here! The walls are black and the lights are low. There are sofas and throw pillows everywhere. The theme seems to be part Indian boudoir and part speakeasy. Thankfully they also have lots of space in the well lit courtyard so we sat out there. 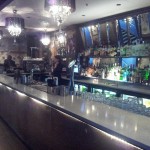 This is what it looks like inside. A very dark appearance indeed!

The specialism here is cocktails and they have some cheap deals (Sun-Thu, Fri before 9pm). The beer selection isn’t terrible but it’s pretty much all lagers. They have Heineken and Cobra on tap and Viru (Estonian beer), Singha, Tiger, Moretti and Old Speckled Hen in bottles. Beers were reasonably priced (we paid £3). There are also bar snacks served here if you are not hungry enough for the buffet upstairs. 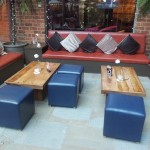 The courtyard is very nice when it’s quiet.

There are a lot of events on at Spice Bar. They have belly dancing on Thursdays, a DJ on Fridays and bhangra on Saturdays. There was a dance class happening on Monday when we went; we would have found out more but the bartender didn’t seem up for chatting.

Unless you’re after one of the events or you’re desperate for Estonian beer, there’s probably not a lot to recommend Spice Bar over other places in The Electric Press.