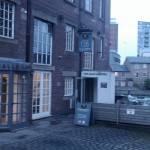 Keep an eye out for this riverside gem!

The Stew & Oyster is tucked away in the corner of the impressive Calls Landing building on the river. You might miss it and think that the only establishment in this imposing structure is the Ambiente tapas restaurant upstairs. But be sure not to make that mistake! Have a wander in and you’ll be pleasantly greeted by a warm and cosy atmosphere and a bartender whose knowledge of beer is put to good use serving an impressive collection. 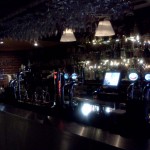 Hopefully this picture gets somewhere near capturing the warmth and cosiness.

When we went, the two hand-pulled ales were Hop Studio XP and Little Valley Withen’s, plus they have Flying Dog Raging Bitch on keg — quite a rare treat! And you’ll find some real magic in the fridge: four Flying Dogs, two Brooklyns, two BrewDogs, Anchor Steam, Bellerose, ReAle, Hop Ottin IPA, La Chouffe, Magic Hat #9 and lots of other foreign bottles. The focus here is definitely on the beer; your questers were quite pleased. They even have a featured “Bottle of the Week.” 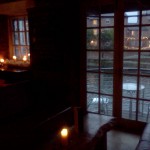 Tiny balcony! Too bad you can’t reserve that table!

We didn’t have any food, but their menu is true to its name, featuring a range of stew and — who’d have thought — oysters, along with some other nibbles. There’s quite a lot of space here, with three adjoining rooms offering plenty of sofas and booths, and the vibe is very much of a place that doesn’t take itself too seriously. Rich found it reminiscent of a bar/café you might find in Belgium. And while the tiny balcony looking directly over the river is probably prime real estate in temperate weather, there are also plenty of tables and chairs in the larger beer garden near the entrance.

The Stew & Oyster was another pleasant discovery for us; were it not for the quest it might have been ages before we made a trip. But it certainly won’t be ages before we go back.