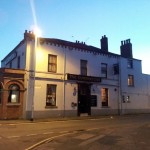 Closeup doesn’t show quite how isolated this pub is.

The Commercial is a historic building found in the recession-hit wasteland of the southern part of Holbeck Urban Village, surrounded by vacant land. On a Friday night it felt very quiet indeed with just a couple of regulars playing pool.

We wondered how it survives at all until we spotted all the Leeds United memorabilia on the wall and noticed it’s halfway along the pilgrimage from the station to Elland Road. On match day it’s probably horrendous but when we visited it was very peaceful. The landlord was very nice and we certainly didn’t feel like we were unwelcome just because we were new.

That said, this is very much what you’d expect from a football waypoint. The beer selection is awful — mass-produced lagers and Tetley’s / John’s keg bitters. The decoration preserves some of the original beautiful Victorian interior, especially the bar with its stained glass and (unused) painted beer taps, but overall it’s what you expect from a pub that was last redecorated in the 90s. It’s pretty big, and it’s clean and tidy. One little quirk is a piano in the corner that bears the signs for the toilets!

Food is served, but it’s sandwiches or lasagne. The music is loud and sounds like it comes from a Now album but it was appropriate for the scene.

We definitely wouldn’t make the trip out here, especially as the beer selection was so poor, but The Commercial was pleasant enough and will definitely suit its target audience.