How did we miss this?

It says something about how often your Questers are in the Park Row area that The Decanter had been open over a month before we even noticed it.

The Decanter advertises itself as a wine bar, and has wine-related artwork everywhere as well as a ground-level wine cellar at the back. The atmosphere is pretty generic “classy living room” with exposed brick at the front and bizarre fake wood panelling at the back. It’s pleasant enough but nothing special. The place is very small and we can imagine when the Park Row crowd sweep in on a Friday night it’s going to get pretty crowded and sweaty. 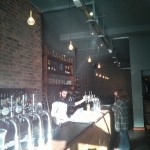 A bar and some bricks.

We expected the beer selection to be absolutely dreadful and we were pleasantly surprised. Brooklyn is the only decent beer on tap, but there are a few good bottles in the fridge: 2 from Saltaire and 2 from Ilkley, Camden Hells, Punk IPA, Goose Island, Flying Dog and Black Sheep. Beer was served way too cold (at white wine temperature) and the lack of good beers on tap keeps this bar firmly in 3-star territory. Still, it’s nice to have one bar in this area with more than shit eurolagers on offer. 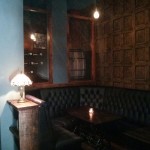 Wood! No… fooled you!

When we visited the staff were really stressed about something — I think we accidentally pre-empted someone else’s review. So it’s hard to know if the staff are normally friendly but they seemed like they would be. We also enquired about food and apparently they’re going to offer bread-and-cheese boards and sandwiches in the near future.

We left The Decanter wondering what its niche is. Bars like this are ten-a-penny in Leeds but it might do well by virtue of it being the only non-chain in this part of town. Good luck to it, but it’s not going to be a regular haunt of ours.