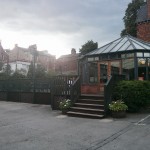 The conservatory bar and beer terrace.

The Faversham is located on the edge of the Leeds University campus and has been serving students for many years, so we were expecting a bit of a dive. Not so! 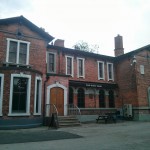 The main entrance is all shut up during holidays.

The first thing you notice is that this place is massive. Out of term time — as it was when we visited — the pub confines itself to its beautifully decorated conservatory and beer terrace, but wandering through we spotted another two seating areas indoors and a large room with a dancefloor and a second bar. 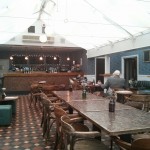 Inside the conservatory bar. We really like how they’ve done this.

The conservatory bar is quite different from anything you’d find on campus back when I was a student. The beer selection is excellent: there is one cask (Ilkley Gold when we visited) and a handful of kegs including Brooklyn Lager and Yorkshire Lager, but the real choice is in the fridge. The London craft scene is especially well represented with beers from Five Points, Weird Beard, The Kernel and ELB and there were also other craft beers from home and abroad including BrewDog, Flying Dog, Brooklyn Summer Ale & Brown Ale and Sierra Nevada. Prices are good but (surprisingly) not the cheapest we’ve seen: I guess The Faversham is trying to cater to a different crowd from the Student Union so they don’t really need to worry about competing. 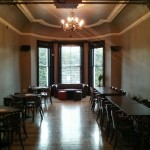 Another room. Imagine it full of students.

They also have a small menu of semi-posh food. Massive plates of gammon and chips are out, shallot and three-cheese salads are in. The soundtrack here is excellent and it appears there are regular club nights and live music events during term time. 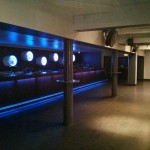 Not similar to the conservatory bar!

Oh, and there’s a basket of blankets. Over a hundred venues into the quest and places can still surprise us with their amenities! 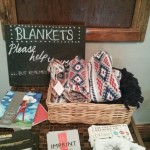