The Lounge at Radisson Blu 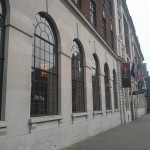 Pretty grand, but then it’s a hotel.

It’s always a bit dubious whether hotel bars qualify for the Quest, and Radisson Blu was on the fence. They do occasionally try to tempt in locals with their advertising, though, so they needed a review.

The place is decked out in a modern interpretation of 1930s Art Deco. It’s quite pretty to observe from a distance, but once you’re inside it’s devoid of any character and is entirely hotel-bar like. The noise from what sounded like a table football table on the (guests-only) mezzanine level is especially offputting. There’s a fire-pit in the middle of the room, which might be nice for some people but just caused me to melt. Music is inoffensive jazz and there’s a striking impressionist painting of what looks like Tina Turner on one wall. 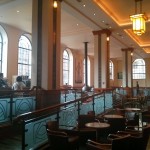 Love the lights. But I can’t drink lights.

Beer on keg comes in the form of Becks Vier, Stella or Boddingtons. The fridge has a couple of nice beers — Hoegaarden and Leffe — but they’re about £4.50 a bottle.

This is a hotel bar, pure and simple. It’s just like hotel bars the world over and I can probably find a dozen in Leeds city centre alone just like it. Any pretence of being more than that is, sadly, unjustified.