Author
This bar has changed its name but not its ownership. It was called Varsity when we reviewed it. 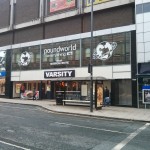 We weren’t expecting a lot from this Smith and Jones stop-in-here-for-some-shots-before-you-head-up-to-Oceana student haven chain and boy were we right on target. 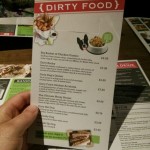 Yes, they serve food in a dog bowl. Why this is appealing, we are not sure.

Varsity is dirty. Their menu actually features “Dirty Food,” but the dirt stretches well beyond the stacks of fried meat (served in a dog bowl) and onto the seats, the tables, and apparently the cask lines. Though the bar had four casks, only one of them was on (a Morland Bitter) and that tasted off. Not in the mood for a sour bitter? Don’t worry, you can always head to the fridge for some… uh… some WKD? Ok, maybe some Foster’s or Carling on keg? It’s pretty grim. 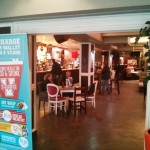 If you see any casks on the bar, they’re probably off.

The food menu has all the markings of a big chain pub — cheap and rather mediocre food. And while they seem to be aiming to look like some kind of classy lounge, the myriad stains on all the purple velvet seats take away from the class just a tad, as does the £10 Nachos & Bottle of Wine special. Are those things that people typically consume together? 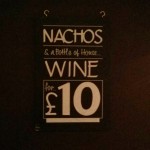 We went just before term time started and it was empty and depressing. That’s probably preferable to how it must get during term time and full of students after cheap food and drink, though it is large enough to handle a sizeable crowd.