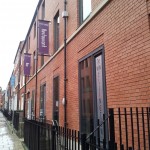 Oh, it’s a hotel? I thought it was another office block.

Not heard of the New Ellington? You’re not alone. Here’s a fancy boutique hotel hiding behind an unassuming façade in the heart of the financial quarter. The bar claims to be “Leeds’s coolest bar” and clearly wants to attract locals as well as hotel guests, so your authors went to check it out.

The décor is definitely hotel-like, but also friendly and comfortable – not clinical and dry like most hotel bars. We were very impressed the moment we walked in. The theme is 20th-century American jazz (the hotel gets its name from Duke Ellington who played the Leeds festival in 1958, although we suspect it’s also a little pun on nearby Wellington Street). We loved the (table) service — very friendly and helpful without being overbearing. 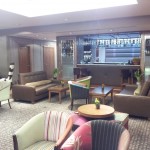 This washed-out photo doesn’t properly convey the relaxing feeling of the bar area.

The bar prides itself on its selection of gins, and it’s not kidding. The menu has 40 to choose from, with not-to-be-sniffed-at Plymouth at the lowest end of its scale. If you like gins or gin cocktails this is the place to be!

Of course, we’re not there for the gin, we’re there for the beer. The selection is very modest but nice enough — they’ve seemingly got one of every class of beer: Black Sheep, Goose Island, Blue Moon, Asahi, Modelo and a couple of others. On tap there’s just Estrella. Not the greatest selection in town but certainly better than you might expect from a bar that specialises in spirits.

There’s also restaurant downstairs which, we were informed, has just won a couple of rosettes from someone for being one of the best restaurants in Leeds. It’s a bit out of our league for a regular Sunday evening (and it was closed…) but it looked nice! 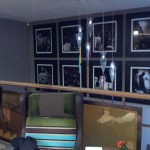 Some of the jazz photographs that adorn every wall.

The prices are OK. You’re never going to get the best deals in a hotel bar but we didn’t feel like we were breaking the bank since the drinks were good.

It’s hard to say exactly why we liked this place so much. If you want a chilled out spot in town with nice sofas and free wifi, and a decent drinks menu, you could do a lot worse than the New Ellington.