Author
The Old Steps has rebranded as a My Thai restaurant. While you should totally visit, we’re marking it as closed here because it no longer qualifies for the Quest. 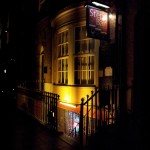 It’s pretty dark on the outside, apart from all the fairy lights.

The Old Steps is a tiny pub hiding in a corner of the financial quarter. You’d probably miss it altogether at the end of York Place if it wasn’t for the gigantic matrix of blinking fairy lights over the window, which definitely help to attract attention.

The Steps has everything you expect in an after-work pub: boring lagers and a few nice beers, bright lights, large seating areas, TVs showing the news and loud music. It does want to be more than this, though, and during the day it operates as a French bistro with an on-site French chef. 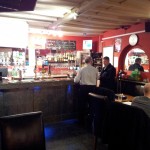 And it’s very bright on the inside.

The beer selection was OK – three cask ales (Golden Pippin, Theakston’s and Leeds Pale) and a handful of semi-interesting beers in the fridge including Chimay Red. I was slightly thrown by being asked if I wanted my Chimay straight from the bottle, but this isn’t a beer-lover’s pub.

I don’t think there’s much to bring us back to the Steps, but it’s a nice enough place for a group gathering if no one is expecting excellent beer. It also has one major redeeming feature: the music is excellent. It was almost if someone had borrowed my brain and made a playlist from there.