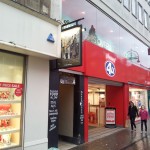 Look for the pub sign hanging outside Phones 4U on Briggate.

The Pack Horse is hidden in one of the famous Briggate “low ins”, an unassuming alleyway next to Phones 4U. Being located off the city’s main shopping street, and having no reputation to speak of, we were expecting something pretty boring.

Turns out we were quite wrong! What we found was a pub that caters for both beer snobs (like us) and normal beer lovers alike. There are 7 cask ales, many of which are from Saltaire Brewery, a decent craft beer selection (including BrewDog Punk IPA & 5AM Saint, Anchor Steam, Brooklyn and Sierra Nevada), some Belgian ones (Leffe, Chimay Red, Vedett) and, unusually, a decent range of Asian lagers (including the excellent Chang) all alongside the usual Eurolagers we were expecting. 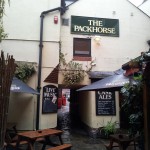 The pub fills the alleyway with its decent beer garden.

The atmosphere is very pleasant: tables of all sizes (including large ones upstairs) are crammed into this historic building, which retains its low ceilings, wood panelling and some slightly odd stained glass. Some of the tables have sofas, there’s a TV off to one side which is not distracting, and the music is 80s and 90s classics played at a low volume. There’s also a decent beer garden filling every available space in the alley. 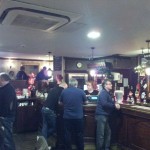 The bar area. Lots of space to breathe.

The Pack Horse knows its audience is mostly shoppers: it offers a range of reasonably priced meals and snacks and it allows kids in the bar area. The upstairs area also has a bar (with a poorer beer selection) which is apparently used for live music (the web suggests gigs happen on a Saturday about once a month).

I think we were a little thrown by what we found. Here is a pub with a pretty much guaranteed crowd that could very easily have chosen to be “just good enough” but instead has chosen to provide a pleasant atmosphere and decent food with a very respectable choice of beers to boot. Add it to your list if it’s not already!