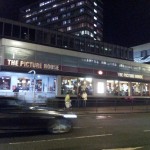 The Picture House sits at the busy intersection of Merrion Street and Woodhouse Lane.

So first things first. The reason you’d go to Crown Carvery’s The Picture House is for the carvery. Their food menu pretty much reads like this: Children’s Carvery, Small Carvery, Large Carvery, or Stupidly Large Carvery. There are a few appetizers and vegetarian options but really it’s all about walking up to the carvery bar, asking for a large slab of meat to be put on your plate, and then helping yourself to all the sides and gravy you care to eat. We unwittingly ordered the extra-large option and were treated to an even more generous helping of meat, a sausage, plus a giant Yorkshire pudding. 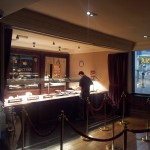 As for the beer…. meh. There were four cask ale taps, but with the Leeds Pale and the Marston’s EPA out of commission, we were left with Yorkshire Terrier and Ringwood Blizzard to choose from. Granted, those are both very nice beers, but they were pretty much all there was to offer. Unless of course wine on tap is your thing — like at most chain pubs there was plenty of that to be had. 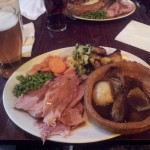 Did we mention the portions are generous?

The value, however, would be hard to beat. We paid £1.75 (!) for a pint of Blizzard and £2.60 for the Terrier. The food also, especially considering the portions. (Keep in mind they’re going for quantity here, not quality, but it wasn’t horrible. It just had the distinct taste of food that’s been sitting around under the heat lamps of a buffet for a while. And the prices do go up on a Sunday.) They also offer an all-you-can-eat breakfast buffet which we may investigate at some point. 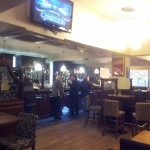 The bar area. Pretty much what you’d expect.

The atmosphere is pretty much what you’d expect in a Leeds chain pub: plenty of seating, fruit machines, clean but not too clean, and a typical Yorkshire crowd. There is a fair-sized beer garden, but the non-stop traffic of Merrion Street and Woodhouse Lane would probably make it tough to enjoy properly.

We definitely wouldn’t come back here just for the beer, but if ever we have a hankering for freshly carved gammon or roast turkey at a phenomenally low price, The Picture House will be our destination.