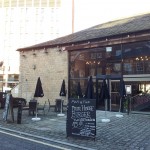 A successful conversion of what once was the granary building.

The newest addition to Granary Wharf, The Pour House occupies the actual granary building of the wharf, offering beautiful views of the canal basin. I don’t know if Americans were involved in its design and development, but it certainly feels like it. Despite drawing inspiration from the 18th-century English painter William Hogarth, everything about this place — from the menu to the furniture to the general vibe — says “American-style pub.” 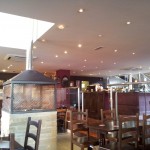 With large seating areas both upstairs (Gin Lane) and downstairs (Beer Street), it’s hard to imagine this place ever getting too crowded. (See the bar’s website for an explanation of Gin Lane/Beer Street divide. It’s quite interesting if you can wade through the dodgy grammar.) However, partly due to the friendly staff, partly due to the wood-burning stove in the middle of the room, and partly due to the menu chock-full of comfort foods, it pulls off a surprisingly cosy feel. The tables and chairs look like they could be out of someone’s living room, and the atmosphere encourages lingering.

The bar offers two rotating cask ales from Wharfebank, both at £3.30/pint. In the fridge you’ll find Brooklyn Lager and an assorted Belgian selection, all in the £4-£5 range. They seem particularly proud of their gin menu, which features 19 varieties, and they also have an extensive wine list. 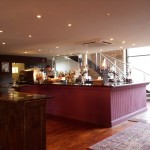 The downstairs bar, or “Beer Street.”

If you’re hungry and you don’t mind spending a bit, the food is quite enticing. Most of it is southern American fare, along with a couple unique offerings like the “Hanging Derrick” skewers, an homage to the actual derrick which sits right outside. They also do pub classics and traditional Sunday roasts. (And if you like a quiz or an open-mic night, they have those too!)

So while the beer selection won’t specifically have us running back, the welcoming feel and beautiful views certainly will. We’ll be keeping an eye on this new venue, wishing it great success.