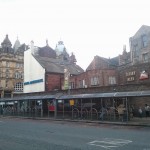 Hey, that’s what the Tetley sign on Vicar Lane is for!

The Regent. It’s one of those places we would only ever consider going in for the sake of the Quest. Situated opposite the market it’s one of the few remnants of the rough, slightly scary, Leeds of the past.

Trying to get a quick pic of the bar as we walked in, the bartender kindly informed us that we don’t want to be taking random photos unless we want a customer to start with us. A good start. Looking around at the regulars, this is definitely not the place for a couple of poncy yuppies like your Questers and it was all eyes on us for pretty much the duration of our stay. 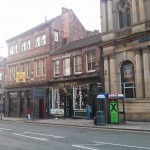 The main entrance. Walked past it many times but never considered going in.

Beer-wise there’s pretty much nothing on offer here. Camra’s What Pub? say it serves cask ale but those taps didn’t look like they got any use. There’s John Smith’s or Tetley’s on keg and Newcastle Brown in bottles, as well as a handful of shit lagers. My pint of John Smith’s was served from dirty pipes, too — it had an almost undrinkable flavour by the end. 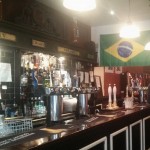 The bar. With people cropped out for their privacy.

There’s a weekly karaoke evening and a TV for sports as well as a sizeable courtyard beer/smoking garden on the way to the unusual outdoor gents’ toilets.

It has been recently refurbished, and it features an internet jukebox, although I’d be fearful to choose the wrong songs in here. I swear it’s the first time I’ve ever heard Limp Bizkit playing on a pub jukebox. 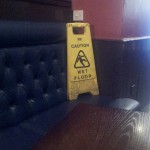 This table is taken.

The Regent does serve what its regulars want, and we are definitely not its regulars. It doesn’t need a good review from us to prosper, thankfully. And, you know, if I was condemned to spend eternity here or the Three Legs, I’d probably choose here.