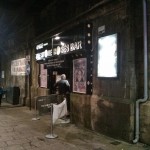 The entrance is hiding under the railway on Briggate.

The Stone Roses Bar is an indie music bar-cum-nightclub named after one of the most famous bands from the wrong side of the Pennines. It has bar in its name but its operating hours as a bar are very slim indeed: from 8pm-10pm Friday and Saturday. At 10pm (Thursday-Saturday) it turns into a full-fat nightclub with entry charges, bouncers and a DJ and stays open till around 5am. 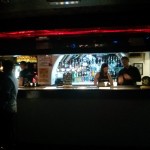 The bar is the only source of light here.

This is like coming home for me, because it’s just like the great many indie nightclubs I used to frequent as a student in Manchester. It’s grotty. It’s dark. It’s sticky and it’s smelly. The beer selection is pants and the music is the same every time. It’s awesome. 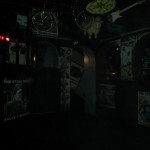 I took this one with the flash. Did I mention it’s dark?

That said, the beer selection here isn’t quite as bad as it could be. There’s Black Sheep, Newcastle Brown and Sol in bottles. The on-tap choice isn’t even worth mentioning. Price-wise it’s much more appealing, although you don’t get the stupidly cheap offers unless you’re willing to drink the awful stuff. 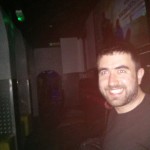 The crazed maniac look is normal when I am in an indie club.

Aside from this there’s not much to tell you. There’s a fair bit of seating in the club area (down some very dark corridors), and it’s possible to reserve some in advance.

If you’re not an indie kid (or an ex-indie kid like me) then you might want to stay away from The Stone Roses on account of the terrible beer and the smell. But if you love dancing to a bit of Happy Mondays as much as I do, then what are you waiting for?