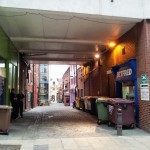 The miserable entrance to Swan Street isn’t reflective of what’s within.

The White Swan has been on this spot since the mid-18th century, and the famous Leeds City Varieties grew out of the back of it in the 19th. But this is no dusty relic: it closed during the Varieties’ own refurbishment and reopened two years ago under new management by Leeds Brewery.

The theme here is classic variety theatre but dressed in modern clothing. The bar is surrounded by bright dressing-room lights, the toilet corridor is plastered with advertisements for the theatre’s insalubrious past, and a grand piano sits in one corner. The atmosphere is very warm and welcoming, which makes it the perfect venue for many of the events in Leeds’s artistic community, including the city centre chapter of Leeds Book Club. 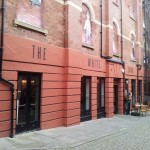 The oldest part of the City Varieties building.

There were 8 cask ales on when we visited: four from Leeds Brewery and four guests. These were paired with a great keg selection (including Leeds’s own Leodis Lager, Brooklyn Lager, and Thornbridge’s Chiron and Jaipur) and a small but exciting bottle selection (3 beers from the amazing Ska Brewing, 2 from Anchor, one from Maui, Odell 5 Barrel, Brooklyn Brown and Duvel 3 Hop). Pabst Blue Ribbon (a trashy beer in Emily’s homeland) also makes an appearance! 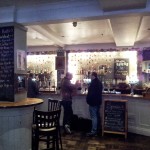 The White Swan is also a food pub, and they have a great selection of reasonably priced gastropub classics alongside burgers and salads (including the amazing black pudding and bacon salad). Sandwiches are served during the day too. If you come before a show they have special speedy set meals, and once a month they have an American Diner Night, which looks amazing (see their website for details). Food is not served on Sundays, as we found out the hard way! 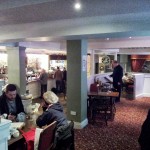 A view of the pub from one end.

There’s also a quiz every Sunday and regular live music events, and there is a small library of books and board games lying around.

We really liked the atmosphere in here and the beer selection is probably the best of all the Leeds Brewery pubs we’ve been to. Even though it’s hidden on an alley it’s quite easy to find, making it a great place to meet up with people and have a chilled out drink and some great food.