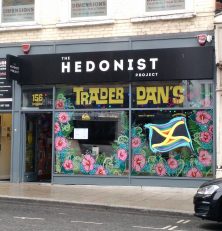 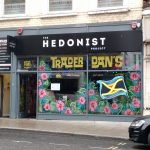 This bar changes its look, inside and out, every three months.

Trader Dan’s Surf Shack is the latest installment of The Hedonist Project, a concept bar that changes identity every three months. We think we missed the last incarnation, but we are back up on the horse! 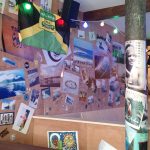 Trader Dan boasts a very small but very enticing beer selection on its menu: Kona Fire Rock (one of Emily’s Top Three Beers of All Time) and Kona Longboard. The problem is that by Fire Rock they mean Sol and by Longboard they mean Red Stripe. (A bit of a problem with their distributors, apparently.) 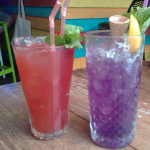 Readers familiar with our level of beer snobbery will know that one does not simply downshift from an awesome craft pale like Fire Rock onto a shitty mass-produced lager like Sol, so we turned our attention to a rum-based cocktail, as that seems to be their selling point. Some fun looking options, I guess, but they couldn’t make my favourite rum tipple (a mojito) because they “don’t have crushed ice.”

Good points: cute surf decor, graffiti-covered walls and a PS2. The staff are charming and can whip you up a beautiful purple or pink rum something-or-other. For people who dig this changing-the-whole-setup-of-a-bar-every-three-months thing, they’re keeping it fressh and interesting, if a little bit cheesy. But there’s nothing wrong with a little cheese.

Just don’t ask for a decent beer. Or a mojito.