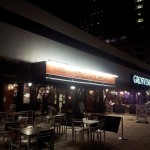 This picture is very bland. Captures the environment well.

Leeds’s earliest Wetherspoon’s pub is hidden behind the Merrion Centre in an area we’ve dubbed “The Land that Time Forgot”, sharing a building with the suitably grim Grosvenor Casino. This area is now towered over by the construction of the Leeds Arena, and we imagine it’s not going to stay unknown and unwanted for much longer. Although the atmosphere inside is more claustrophobic and old-fashioned than its newer cousin, the Stick or Twist does a very good job with the tools it’s been given.

Most notably there are a whopping twelve real ales on tap! We visited during the International Beer Festival, but it looks like there are twelve all year round. The bottle selection is the usual Wetherspoon’s fare – good if you like Eurolagers. We were greeted by a very friendly barman who cared about beer, which is always a major plus point. 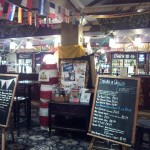 A welcoming sight as we entered.

Like all Wetherspoon’s pubs, the Stick or Twist has amenities coming out of its ears, with a full menu, coffee, breakfast, sofas and a little multi-function arcade game. There’s also a massive beer garden at the front offering dramatic views of… er… the entrance to the bowling alley and a multi-storey car park.

When the Arena opens in late 2013, we predict this area will be different. But the Stick or Twist has lasted 15 years in an area that has already seen much change in that time. We’re certain this hidden Wetherspoon’s has a long future ahead of it, especially if they keep up their commitment to ale.