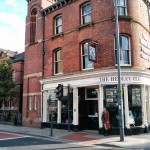 This little building is part of the pub, but don’t be fooled into thinking it’s the whole pub!

The Hedley Verity is our last Wetherspoon’s in the city centre. This one is branded as “Lloyd’s No. 1 Bar” but the two chains have converged so much over the years that the only real difference is that you’ll hear piped music played in Lloyd’s. 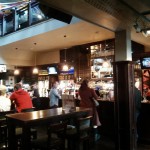 This place is vast. Seriously vast. It looks kind of big when you first enter but after you wander around for a while you realize it’s got about a hundred rooms each the size of some of the smaller pubs in Leeds. It’s nicely decorated with vintage photos of Leeds and cricket memorabilia (Hedley Verity was a legendary Yorkshire bowler — who knew?) and it feels open and airy because of the high ceilings and windows everywhere. There’s also a small beer garden out the front which touches onto the terrifying Yates’s beer garden next door. 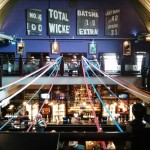 The view of the bar from the mezzanine is quite pretty.

There’s not much else to say about The Hedley Verity that we haven’t already said about all the other Wetherspoon’s pubs we’ve reviewed: There are 9 cask ales and 1 cask cider, all served at reasonable prices. The bottle selection isn’t spectacular but they do have Sam Adams and a few passable Eurolagers.

Most people will be here for the food and it doesn’t disappoint. It’s the same menu you see at other Wetherspoons: lots of choice of large portions of decent-ish quality food at low prices. One day each week is the curry club, steak club and Sunday roast club. 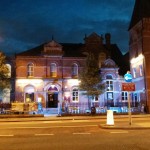 This is what the Hedley Verity looks like in the dark.

They may all be exactly the same, but you can’t really go wrong with Wetherspoon’s, and The Hedley Verity is no exception. Certainly on this street it’s got the best beer choice and the most chilled out atmosphere, but I guess if you’re up this part of town that might not be what you’re looking for!