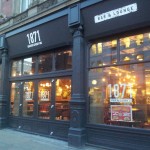 You’d never know this is a hotel bar from the outside.

1871 is the Marriott Hotel’s bar, but with a main entrance onto Boar Lane, they’re definitely trying to attract non-hotel folk in here for a drink. The space is quite large with plenty of seating, and decked out with lots of robots, 1950s sci-fi kitsch and Lichtenstein-esque posters. It makes for a nice atmosphere and doesn’t feel anything like a hotel bar. (Until you pay your tab, that is; see below.) 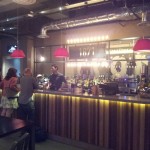 The bar and one of its very friendly staff. You can’t tell from this photo but I’m asking him ridiculous questions.

There’s not much going on in the beer department, however. They’ve got Black Sheep Ale and Blue Moon in bottles, but absolutely nothing worth ordering from the kegs. After you’ve paid £4.75 for a Black Sheep, you’re probably not going to want to stay for a couple more, especially when there are plenty of better offerings nearby. 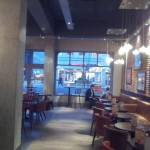 Very quiet on a Sunday night.

The limited bar-type menu offers pretty mediocre food, but it’s ok. With somewhat high prices for that too, it’s not surprising that this spot is typically less crowded than its neighbour. The upside is it’s usually chilled out and you’re likely to nab a quiet place to sit. 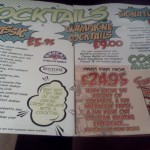 A taste of the décor.

The amenity that 1871 has going for it is its friendly bar staff. They were very attentive and indulged all of my questions about the food and drinks menu. I was feeling particularly gregarious and inquisitive that evening, and the bartender took it all in stride, even complying when I facetiously suggested he draw me a picture of the seafood platter! 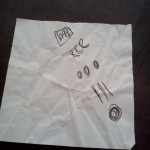 The bartender’s rendering of the seafood platter was right on the money.

Would we be back here? If it’s Sunday evening and we’re looking for a place that’s still serving food, yes! Otherwise, we’d probably wander round the corner up New Station street for a better and more reasonably priced pint.