Home » Bar reviews » Around the World in 80 Beers

Around the World in 80 Beers 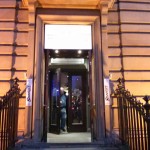 My phone camera decided you didn’t need to read the sign on the door.

This novelty bar occupies the ill-fated middle floor of one of Leeds’s most popular towers of alcohol. The concept is a great one: almost everywhere in the world brews its own beer and Around the World wants to bring them all together under one roof. 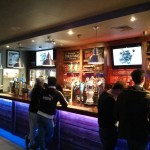 Doesn’t look much like a novelty bar from this angle.

Despite the name, there are actually well over a hundred different beers on offer, from almost every beer-drinking nation on Earth. They’re typically the “tourist” lagers from each country, but there are some classics like Australia’s Little Creatures and Scotland’s Punk IPA alongside some surprises including an Alaskan smoked porter (at £19 a bottle, a typical price for the rarer beers). There are also a handful of draught beers, mostly Carling-type crap but a couple of good ones including Brooklyn Lager. 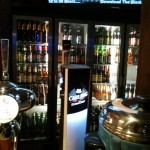 One of several beer fridges. Lots of beers!

The travel theme extends to their “beer passport”. When you’ve tried every beer from a specific continent you can get a stamp on your passport and when you get all the beers you get your name on the wall and a chance to win a real round-the-world trip. Encouraging responsible drinking there.

The food is stereotypical bar food from every part of the world, with a daily special from each continent. Emily would like you to know they sell curly fries — we should have a tag for that! There’s table service in the dining area which might be helpful once you get to beer number 60 or 70. 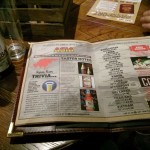 Pages from the “beer passport”. It’s all a little bit weird.

What’s really interesting about Around the World is that it’s aiming itself at the general loud party crowd, many of whom might have had some of these beers on holiday but don’t make a habit of drinking a variety of beers in England. Anything that widens people’s palates has to be a good thing for world beer, but it’s definitely not for us. The staff are not knowledgeable about beer (our bartender offered Emily her beer over ice…!), the whole environment is way too brash and loud for us, it’s very expensive and it just felt like we didn’t belong here. And the great thing about Leeds is that we’ve got several other bars with this kind of beer selection.